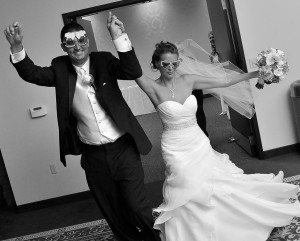 One of the best ways a newlywed couple can “set the stage” for their wedding celebration is demonstrated in their arrival into the reception.  Today’s couples have turned  their introductions into a choreographed stage performance.   Combined with a seasoned, crafty announcer, the choice of music is clearly the underlying pulse which springboards the wedding party into motion.  Below are a list of songs that have made for some very entertaining grand entrances.  On a side note; More times than not, this is one of the few times during the reception where the groom is very adamant about what song is played.  Most every time he gets his way. Here are Nick & Jenn Spyke who set the stage for their celebration entering the reception hall to “Forever” by Chris Brown.

I’ll Be There For You (Theme From “Friends”) – The Rembrandts

Give Me Everything – Pitbull Featuring Ne-Yo, Afrojack & Nayer

Now That We Found Love – Heavy D & The Boyz

You Shook Me All Night Long – AC/DC

For Once In My Life – Stevie Wonder

You’re The First, The Last, My Everything – Barry White

Everybody Have Fun Tonight – Wang Chung

This Will Be – Natalie Cole (eHarmony.com Theme)

Chapel Of Love – Dixie Cups  (OK, sometimes the brides have their say)

Can’t Get Enough Of Your Love, Babe – Barry White

Another One Bites The Dust – Queen

U of M Fight Song – University of Michigan Marching Band